Danny Cipriani and the Gloucester Rugby team ran on with “Be Kind” on back of shirts in Gallagher Premiership Rugby match against Sale Rugby Ace is determined lessons must be learned from Caroline Flack’s death and a positive legacy is createdPremiership Rugby’s governing body gave the go-ahead for the kit change to support measures to improve mental health
Gloucester rugby union ace Danny Cipriani will lead an emotional tribute to his friend and former partner Caroline Flack tomorrow when he led out his team mates in wearing special shirts before tonight’s match against Sale.

The entire Gloucester Rugby team supported the star by wearing the shirts embossed with the words “Be Kind” on the back, to encourage people around the UK to think twice before making critical and hurtful comments on social platforms and in the media.

The latest tribute follows the release of Cipriani’s personal appeal for the public to be more compassionate and show a greater understanding of mental health issues with a video released last week. In it, the star player confessed to suffering from thoughts about taking his own life in the past.

The club dedicated the Gallagher Premiership Rugby match against Sale Sharks to shine a light on mental health, to raise awareness and promote kindness through the #bekind campaign.

The Gloucester Rugby Foundation teamed up with the Samaritans to raise awareness of Mental Health and will be bringing in-stadium support to Kingsholm and fans at the match.

The fly-half, who remained close to Love Island presenter Flack, said: ‘Caroline was one of the most caring, genuine people I ever met. She endured unimaginable criticism during her years in the public eye but through it all, she just wanted people to show a little kindness to# each other. And that’s a message that should be her legacy – be kind.

“We all have spells of self-doubt, anxiety and low points. Nobody needs other people to point out their flaws and make them feel worse about themselves. A little kindness goes a long way.”

Premiership Rugby gave its blessing for the show of solidarity by approving the change of kit after a personal request from Cipriani himself. The governing body has been a powerful driving force in opening up the discussion about mental health issues in the sport and providing support and education for players in tackling the pressures they face.

Darren Childs, CEO of Premiership Rugby, said: "Rugby is a tough game and although the players can put up with a lot of physical knocks, sometimes, the levels of inner hurt can go unnoticed. The sport has been making great strides in breaking down the barriers about discussing mental health challenges. But we all need to be more understanding about the struggles people are going through and being kind to one another is a start. We had no hesitation in agreeing to highlight this simple but important gesture.”

The Samaritans are always there for those who have nowhere else to turn. You can call the Samaritans on 116 123. 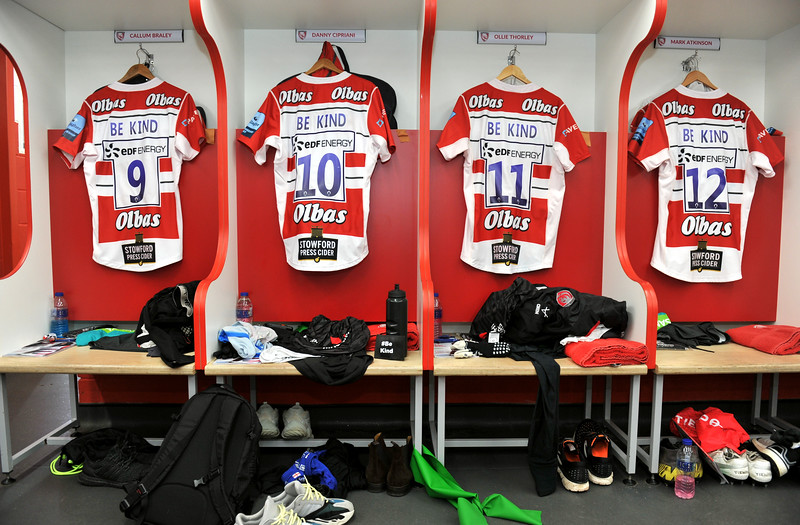 *** FREE FOR EDITORIAL USE ***
Danny Cipriani and the Gloucester rugby team wore shirts embossed with the words “Be Kind” for tonight’s game against Sale Sharls. Premiership Rugby’s governing body gave the go-ahead for the kit change to support measures to improve mental health in light of the death of Caroline Flack.
Gloucester Rugby dedicated the Gallagher Premiership Rugby match against Sale Sharks to shine a light on mental health, to raise awareness and promote kindness through the #bekind campaign.